The Pardon of St Yves 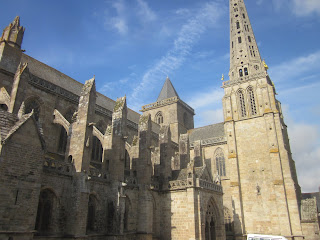 I spent the weekend in Tréguier, a favourite haunt, but for the first time to attend the great Pardon of St Yves. Yves Hélory (1253-1303) was an ecclesiastical advocate and extraordinary defender of the poor, well-known all over the Trégor in his day and considerably further afield following his canonisation in 1347. He is the patron saint of Brittany and his special day attracts thousands for a procession between the cathedral in Tréguier and the chapel in Minihy-Tréguier, his birthplace and home. The relic of his skull is carried by lawyer and priests along the 1.5km route and back.
The town is all dressed up for the event with his family's yellow and black flag (thanks to a crusader grandfather) displayed everywhere together with sheaves of yellow broom and hundreds of lily flowers studded into hedges along the way. 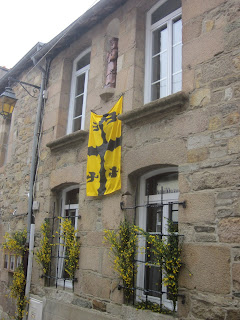 I attend the mass in Breton at Minihy, for a while in the back of the chapel and then outside in the cemetery, still singing along from the hymn sheet (Breton is easy to follow and generally pronounced as it looks), and watching pilgrims turn up now and then to crawl under the 'tomb' of the saint, an ornate stone table. The best sensations of the occasion - in the simple and emotional faith of St Yves - are most felt here without the great numbers thronging around the cathedral in Tréguier, where the service in French is also taking place. 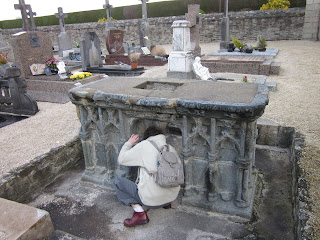 Walking into the town along the processional way in reverse - Chemin de St Yves, rue de St Yves - I have time for a leisurely coffee while crowds gather to witness the spectacle. Suddenly I realise that just seeing a bunch of lawyers coming out of the south door with their proud burden is not what I want to see most, and it will be hard to do so or to take photos in the scrum of curious onlookers and the faithful following the parade. 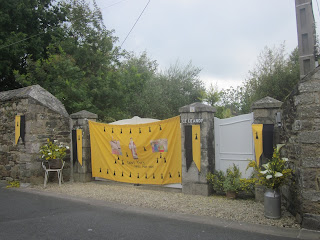 I retrace my steps all the way back to Minihy, where a few are waiting at the point by a wayside stone cross where the main ritual of the procession occurs, on a ninety-degree turn down to the chapel.
After a short wait I hear singing floating up from the village - canticles of St Yves are repeated over and over during all the ceremonies - and the procession from Minihy with its three ancient banners arrives to await the cortege coming from Tréguier. The priests take up a position facing along the road towards the cathedral. 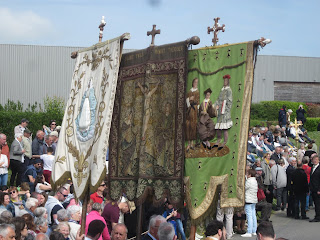 The crowd grows and seeking a place with a good view and the sun behind me, I'm forced to get up on a very narrow bank where three older people are sitting with their legs dangling. It requires considerable muscle and foot strain to keep perched up there for more than half an hour of anticipation. Finally the first figures appear and a Breton pipe band leads the way, passing in front of the cross and down into Minihy. Behind it an astonishing spectacle, wave on wave of banners and ceremonial crosses stretching as far as I can see. 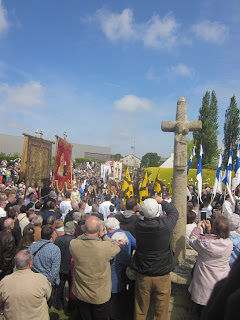 The ritual of encounter begins as Minihy's tall metal cross is lowered and raised in a nod to various passing crosses from other parishes, which also dip so that the two metal faces almost kiss as they skim by one another. It is nearly forty minutes before the skull appears in the distance, a priest in front flanked by lawyers bearing the weight of the reliquary on their shoulders. They stop a little way away. The rest of procession has passed. We all wait. Finally the Minihy banner-carriers move forward and the skull is brought to face them. Up and down the banners go - what body strength it must take - high in the air then dropping towards the ground, saluting their saint as he arrives home in his own parish. This is the climax of the Pardon, the relic visiting its most profound site of connection. After passing through the village, the procession will return to Tréguier. 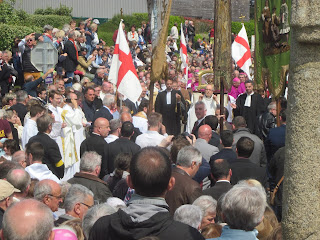 This is an old ritual, and of more significance that touches me than is usually the case in official ceremonies. The depth of relationship with place is something I understand. Indeed I am currently writing about St Yves and his paths in the Trégor. Almost every day, despite travelling far and wide in his duties as a priest elsewhere and preacher everywhere, Yves Hélory walked back home to the little family manor house where he tended the old and sick and saw that all their needs were provided for. Thirty or forty kilometres was nothing to him in search of home and belonging. The Pardon, despite all the trappings and pompous lawyers, both of which the saint himself would have deplored, still manages to symbolise this simple truth.

Text 7: Musings of a Patron Saint 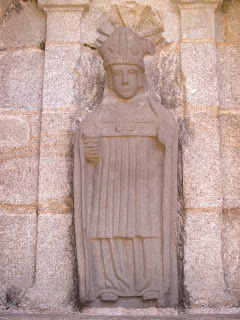 I am the saint. This is my church.

I stand over the porch, I stand next to the altar,
Sometimes a place on the calvary.
You can see me on my stag, with my wolf,
Beside my dog, along with a horse or cow.
I prefer animals. They obey me.

I am honoured with altarpieces, telling my story,
Through offerings and prayers, a relic, a tomb.
Honoured by banners and processions:
On my holy day, the Pardon winds its way.

Not always so easy being a saint.
All those demands and quarrels and envy:
I would prefer the quiet peace of a lonely spot,
But destiny says otherwise.

I have a mission: it is quite an exalted position.
Special powers make me a magician,
Using my staff for a wand.

I could strike a spring from the earth
Drive dragons to suicide,
I could cure shingles, blindness and burns.
Make children walk or form in the womb,
Bring rain to crops,
Call up the wind or pat it down
To save ships in a storm.
At my best, I was most effective.

People spoke fervently to me once,
A saint who was here and did stuff of note,
Rather than God, too busy or remote.

Now not so much.
No longer the draw, the object of hope,
I live in the past, and to be honest I’m bored,
It’s an unsettling slope,
From adored to ignored.